IS THERE A GENDER SPLIT IN THE PROPERTY INDUSTRY?

Diversity is a hot topic in offices across the UK as issues regarding the difference in pay and opportunities are being challenged by women across the world. This interest is no different in the real estate industry, where there has long been a stereotype that men belong in sales and women in lettings but how true is this today? We asked some of the industry’s leading women their opinions on the matter.

Penny Guest, Regional Director at Kinleigh, Folkard & Hayward believes that a gender imbalance is less of an issue today:

“From an estate agency perspective, there is little evidence to suggest that the property market is still male dominated. At KFH, half our regional directors are female and we continue to embrace a modern outlook on the issue”

However, Penny does go on to say:

“As women, we have had to prove to ourselves, and everyone around us, that we are every bit as capable in excelling in this industry as our male peers. Although this has taken longer than it should have, I do believe we are now are at the stage where respect is equal, regardless of gender.”

Is it fair that women have had to work harder than everyone else to prove that they belong within the property industry? No, but women have fought through the challenges to make their way to most senior positions, where they can make a lasting difference.

Patricia Farley, Director at Farleys, offers a different perspective on the supposed gender split throughout the industry today:

“Gender is a not an issue, it is down to the individual to build their knowledge, know their market, network and offer clients an exceptional service.”

The stereotype has survived through the years, but how true is it?

Lisa Simon, Head of Residential Lettings at Carter Jonas, seems to think it still has some accuracy:

“I feel sales is still dominated by men but some of our best agents are women.”

So, despite women supplying the sales departments with quality, there may not be a quantity to rival the amount of men. So what could we as an industry do to try and tackle this imbalance? Lisa suggests:

“More flexible working for women when they are at the stage they would like to start a family. This would encourage women to return to work in property after they have had children.”

It’s no secret that when hiring, the idea of maternity leave is enough to influence some employers. In 2014, The Guardian found that 40% of managers avoided hiring younger women in an attempt to avoid maternity leave. It was also found that over 40% would be wary of hiring a mother for a senior role. A third of managers asked also claimed that when a woman returned from maternity leave, they were not as good at their jobs.

Although no longer in the position, during her time as Employment Relations Minister, Jo Swinson told The Guardian:

“Pregnancy discrimination is illegal, immoral and completely unacceptable. There is no excuse for such attitudes from these employers, who frankly are dinosaurs. British business simply can't afford to lose out on half of the available talent pool.”

Another issue facing women throughout most industries is the inequality in pay and career opportunities. Despite half of KFH’s regional directors being female, Penny Guest believes it is still an issue:

“There will always be questions about inequality in pay and career opportunities for women, especially as men have historically dominated the market. However, with an increasing number of successful businesswomen taking control, I don’t see these issues staying around for much longer.”

This issue spans throughout the world from Hollywood to the property industry, but just how bad is it? A recent report from the Institute of Financial Studies found that the annual earning gap currently lies at 23%. However, it is important to note that this figure only represents the wage of those who graduated from University a decade ago. Nonetheless, the figure is 10% below what the Office for National (ONS) Statistics have predicted in their Labour Force Survey.

The inequality in wages is illustrated in this infographic from City A.M and portrays the staggering difference between the top earnings for both genders. 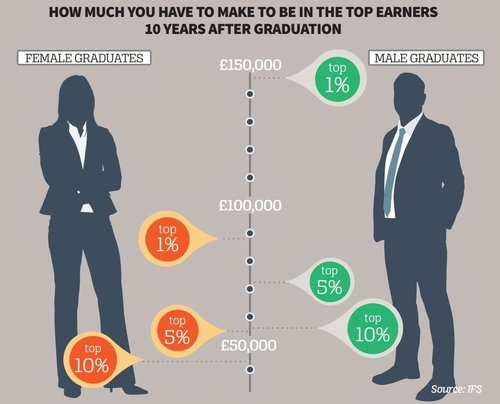 To say there are no opportunities for women within the industry may be a bit extreme, but it would be naïve to suggest that the industry provided true equality. The fact that a stereotype exists which puts men in a more favourable position proves that more can be done to promote equality throughout the sector.

However, Patricia Farley insists that women have opportunities and will continue to thrive in the industry:

“If you are dedicated and determined and want to be the best you will succeed in the industry.”

Regardless of your stance on this topic, hard work and determination are key to progressing within real estate and these are not male exclusive traits. Far from it.