Britain’s position in the EU has been shrouded in uncertainty for the past few months as politicians have been partaking in a variety of alternative campaigns to decide the fate of our position within the alliance.

Now the results are in and the trio of Nigel Farage, Michael Gove and Boris Johnson have managed to narrowly win the referendum with a 51.9% majority.  Alongside this shock result, David Cameron announced he was standing down in October, while a vote of no confidence motion has been started against Jeremy Corbyn, who currently faces a coup which has already seen 17 people resign.

The morning of the result saw the pound fall by 10% to a low not seen since 1985 while the FTSE 100 index fell by more than 8%, wiping £50 billion from London’s top flight index. Back in March we explored what could potentially happen if Britain left the EU and found that a majority of property experts believed that leaving the EU would have a detrimental impact on the property market.

In the lead up to the referendum, London’s housing market started to slow as uncertainty over the result created a crisis of confidence for house buyers. This appears to have continued into the following week as deals continue to fall through due to buyers still assessing the impact of the vote on house prices and even their own job security.

As of Friday morning many industry experts had forecasted that the property industry will suffer in the short term with the Treasury forecasting a fall in house prices by up to 18%. Alongside this, the national Association of Estate Agents predict that departure from the EU will depress prices further with the average house losing £2,300 outside of London and £7,500 in the capital.

Initially the result came as something of a blow as most of the market experts we spoke to were voting for remain, which in turn was represented by 60% of the capital voting heavily in favour of staying within the EU.

However once the dust had settled, the response was mainly one of positivity and relief as the experts in the property industry finally had certainty with Britain’s future and could finally update start to their business plans accordingly.

Despite the relief, the short term effects on the estate agents have been made clear. London agent Foxtons has now warned that its annual profits and revenues will be lower than expected as a result of all the uncertainty within the market. The company suffered in the early trade following the result with shares dropping by a whopping 16.7%. 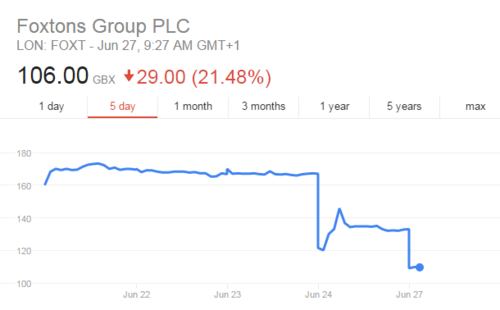 In response to Brexit, Foxtons released a trading statement addressing its current views on the London housing market:

“While it is too early to accurately predict how the London property sales market will respond, the upturn we were expecting during the second half of this year is now unlikely to materialise”

So, while London’s property sector had previously seen three years of rapid growth, the potential of an immediate stalling has got some industry experts worrying. However, Bank of America Merril Lynch analysts have predicted that the industry will see a 10% price correction in the next year, showing that the industry will recover and will see consistent growth.

One of the benefits of the result is that some aspects of the property market may actually thrive in the current, albeit extraordinary conditions. How? Well the foreign investors who currently make up the majority of property purchases within London’s prime residential market know that they can get better deals due to the weakening of the pound. The prospect of picking up a portfolio of ‘discounted’ assets may be too much for some buyers to resist.

So while our currency will eventually stabilise, London’s property experts could expect a busy and potentially successful few weeks whist foreign investors seize the window of opportunity that the weak pound is set to offer.

While Britain’s economy could continue its instability in the short term, James Roberts Chief Economist at Knight Frank believes that the UK will still continue to thrive, commenting:

“The underlying strengths of the UK economy remain in place, and ultimately real estate is an investment that works best for those who pursue long-term goals”

Only time will tell as to whether voting to leave the EU was the right thing to do and as property experts admit, they’re not fully sure what the long term implications could be.

However, it seems like a Brexit was not enough to burst London’s housing bubble and there is still a housing shortage. This lack of supply could help underpin the pricing of the most desirable areas, while it is also thought that overseas investment will not be affected as many firms have already been approached by those hoping to be able to get a better deal on property within one of the world’s most desirable cities.